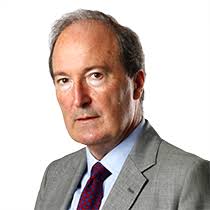 Charles Moore speaks at the Devonshire House Quinquennial Dinner on 09.10.19.

Charles Moore has chosen as his topic “Thatcher and Leadership”.  No doubt, this will be broadly interpreted but it is particularly appropriate as Charles Moore will be speaking to us a week after his third and final volume of Margaret Thatcher’s biography will have been published.

Surprise…. Surprise …. Copies will be available on the night – and signed by Charles Moore!  Details below.

We are also very pleased to welcome Ali Miraj who we have invited to ensure smooth running of the talk.  With a nose for original thought and on behalf of Devonshire House, Ali will, amongst other things, promote Devonshire House interactivity

Ali Miraj is a Director in Infrastructure Finance at ING, financing major infrastructure assets across Europe.  He is a Chartered Accountant.  As well as his day job as a financier, Ali Miraj is a social entrepreneur, DJ and political activist. Many will also know him – with a different sort of interest – as the Founder of the Contrarian Prize which recognise individuals in British public life that go against the grain and demonstrate independence, courage and sacrifice.  www.contrarianprize.com.

Elected as a Councillor at the age of 23, he stood for Parliament in both the 2001 and 2005 general elections, served as a board member of both the Conservative Party’s Policy Commissions on Quality of Life and International and National Security (2005-2007) and was a member of the Strategic Advisory Board of Cass Business School, a Trustee of the Campaign to Protect Rural England, a director of the UK Board of the Abraham Fund Initiatives.  Currently, he is an ambassador for the charity War Child, a Liveryman of the Worshipful Company of International Bankers and a Freeman of the City of London – and also the resident DJ at “Decks and the City”, a monthly night in Shoreditch for City professionals, with a secret passion for playing House Music which i established.  Ali is also a Member of Devonshire House.

We have also been asked about Volume 2 and Volume 1.  If you order it from us by 25.9.19, we can arrange to have some on hand – which can also be signed by Charles on the night

Places at this milestone Quinquennial Dinner are limited to 60 at the Royal Thames Yacht Club and are priced at an attractively nostalgic price of £85 + VAT. Booking is through the Eventbrite link.

We hope you can join us.